After reaching a new all-time in early August, gold (GLD) has been gradually consolidating in the past 4 months against most of currencies despite rising inflationary pressures. Figure 1 shows that GLD is down over 12% from its August high of $194.5 and currently trades slightly below $172, which corresponds to the 38.2% Fibo retracement of the March – August range.

With most of the developed economies under national lockdowns to fight the pandemic, central banks are expected to add nearly $3 trillion in liquidity in 2021, which should continue to support assets with ‘limited’ supply such as gold in the medium term. Hence, investors have been asking the following question: is it a good time to buy the dip in GLD? 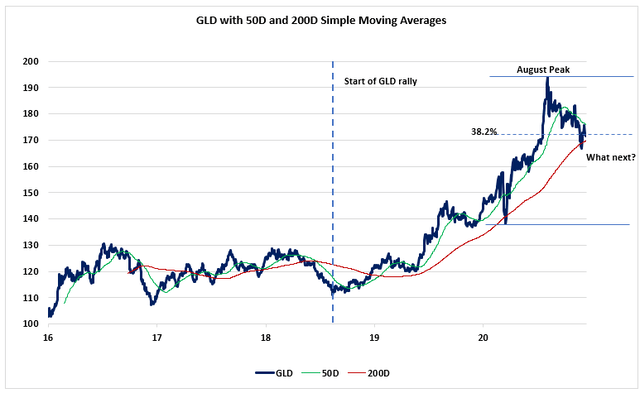 First, one interesting development that has been occurring in the past three weeks has been the divergence between real interest rates and GLD. Figure 2 (left frame) shows the co-movement between GLD and the US 5Y real interest rate; while the 5Y real rate is down nearly 30bps in the past month to a new low of -1.44%, GLD prices have continue to test new lows. We do not think that this divergence will persist in the coming weeks and therefore lower real yields will eventually generate a positive momentum for GLD.

The second important driver of GLD is the US dollar. As US real yields, the US dollar has continued to depreciate against most currencies with the USD index constantly testing new lows and currently trading below 91, its lowest level since April 2018. It is also surprising to see that the USD weakness did not generate a little rally in precious metals and that both gold and the US dollar have been falling simultaneously.

We have also seen that the total amount of negative-yielding debt has continued to reach new record highs and currently stands at $18.4 trillion. Figure 3 (left frame) shows that the amount of debt yielding less than zero and GLD have both co-moved strongly since 2016; after plunging by nearly $10 trillion between August 2019 (when the US 2Y10Y yield curve inverted) to $7.7 trillion in early March 2020, the amount of negative-yielding debt has been constantly soaring in the past 6 months and should support GLD prices to the upside.

Eventually, it is also important to know that gold not only acts as a hedge against inflation and rising money supply in the long run, but it also acts as a ‘anti-fragile’ asset that tends to appreciate in periods of high uncertainty and market stress. Figure 3 (right frame) shows that gold has been one of the best performers when volatility rises and equities correct (monthly average returns for gold, silver and USD when VIX was trading above 20); GLD was up 7.6% and 3.6% in Q4 2018 and Q1 2020, respectively, while the SP500 fell by 14% and 20%.

In addition to all the main drivers showing buying signals on GLD, the major 5 central banks (Fed, ECB, BoJ, PBoC, BoE) are expected to add another $5 trillion in assets within the next 24 months; figure 4 shows the evolution of the top 5 central banks’ asset since 2002. With most of the developed countries running restrictive economies to prevent the spread of the virus, business and people will constantly rely on governments’ assistance and therefore aggressive monetary expansions from central banks in the coming months.

This chart assumes that financial conditions will not start to tighten dramatically (as a result of a sudden selloff in both credit and equities) and therefore we think that additional easing measures could surprise participants in 2021 and 2022 if market starts to correct, which could generate a new rally in GLD. 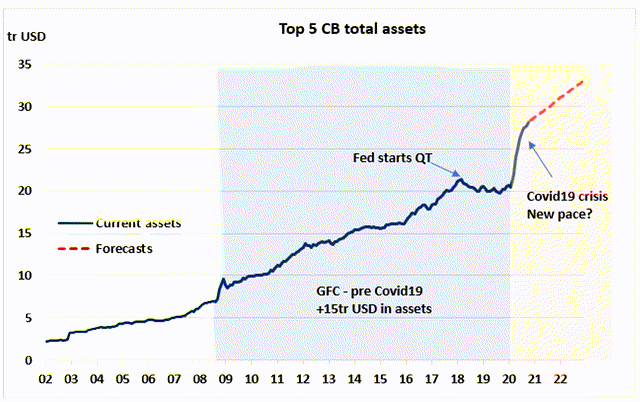 Investors have also been surprised by the strong divergence between GLD and Bitcoin (BTC) in the past 3 months; figure 5 shows that one unit of Bitcoin has doubled in price since early September while GLD is down 5 points to 171. We do not think that this divergence will last in the medium term and we would expect both assets to move in the same direction with Bitcoin becoming a high-beta play on gold. If we regress the weekly changes in Bitcoin prices on the weekly changes in gold prices since 2017, we find that the coefficient beta is 1.18 and is economically and statistically significant (the coefficient increases to 1.50 when we start the regression in 2018, which confirms that Bitcoin has become a ‘high beta gold stock’). 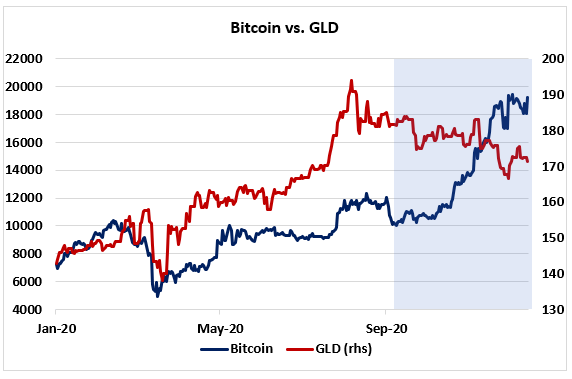 With all the main drivers of gold showing positive signals, it is clear that the consolidation in GLD is close to its end and that the precious metal should enjoy another bull phase. We are concerned that governments may underestimate the consequences of Winter lockdowns and that central banks may end up adding more assets than the market is currently pricing (which would be strongly positive for GLD). The first support on the downside stands at $169.80, which corresponds to the 200D SMA, followed by $165.30 (50% Fibo of the March – August low-high range). We think it could be worth starting to buy the dip if GLD breaks below $170 as it will certainly retest its yearly high ($194.50) in 2021.

Disclosure: I am/we are long EURUSD, GLD, BTC-USD. I wrote this article myself, and it expresses my own opinions. I am not receiving compensation for it (other than from Seeking Alpha). I have no business relationship with any company whose stock is mentioned in this article.